The latest baby to Malaysian army 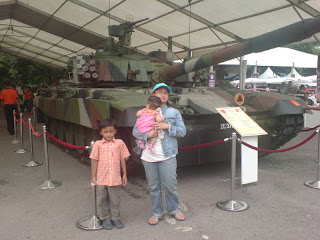 This armor car is very2 new and the latest addition to the army. Well, impressive. i was there @ KL International tatoo spending my Saturday. There were a whole lot of army peeps there. good thing is my fren bought the ticket for us earlier. Reached Stadium Merdeka around 4.30++pm. a tad too early. We had char kuay teow before hitting the exhibition. It was, well, i mean the char kuay teow is edible. that's it. nothing more i could say about it let alone praise the taste. Then, off we go to the exhibition. I was impressed. i saw the internal area of the armor car for the first time in my life and i could say, stuffy!!....how on earth would these peeps last in there?? imagining myself in it, somewhere in deserty country...urghh..not gonna happen..well, i'm gonna attach some slideshow of the events there. KL International tatoo?? did i miss anything? there was only one bike i saw for the whole night. yes, it's the malaysian team and they're supposed to break the record recently but i cudn't catch up. and....in the middle of the show, there was this acrobatics @ gymnastics where these men jumped synchronized-ly. but overall, it was not a tatoo show!! it was more to brass bands' show!! hmm..how many countries there were? Jordan, India, Scotland, US Fleet, Brunei (impressive show) and many more incld Malaysian. So far, the best is still Brunei, entertaining. Scotland team was predictable as i expected some "William Wallace" songs..what? dunno who William is? watch Braveheart not?..ow ok...the infamous song was also played. Nice to hear but i was totally sleepy. poor sofiya, it was drizzling. lucky i did bring my jacket and she was safe and sound wrapped in the jacket. Some good samaritans offered their umbrella seeing i had a baby with me. I refused the nice offer and i am glad to know as there are still good peeps around.hooray...ok..India team - sorry i keep mentioning their country of origin name as i can't remember their full name. all these teams are from their own armed forces i.e. navy. So ok - India team even played the soundtrck of Kabhi Kushi Kabhi gham in the scene where Kajol is praying around the house. yeah i recognized the song coz i love that movie....ok..whatuever, watch the slideshow la...i'll put it up later..I JUST DID..

ok, just in case ur wondering "what's up with the monorail"? that was my 1st time. clinge here, clank there..pretty scary, dun u think? LRT is by far better..excep there's no other trains going to Stadium merdeka except monorail *sigh*