For the second time, i was about to set foot in Indonesian Soil on Oct 19th 2012.
i took the Airbus from KL Sentral to LCCT which cost me RM8.00/way.
Boleh, kene tanya concierge kat mana stesen .yela before this i naik kat depan entrance..rupanya kalau siang ambil kat bawah nu haaa.. 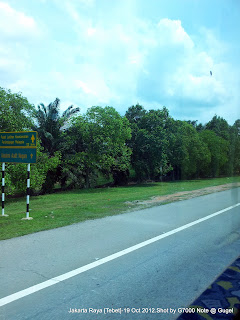 Don't ask me why. I simply love Bandung..Jakarta? not so but we have decided to land in JKT so we could say "been there already whaaattt"..hahahahhaha

There were 13 of us in 4 different flight sechedule.
Mine was on Oct 19th, 3pm++ via LCCT (Air asia kot). The delay was only for about 15 minutes in boarding hall but darn.., i spent about 30 in the belly of the big bird.
Good. Time to catch-up with some sleep since i was alone (by preference) and i didn't get much sleep the night before. 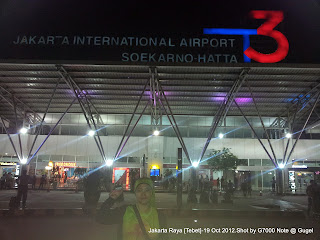 TA-DAAAAA....the airport or Bandara in indonesian language.
Rupanya, Leena & mom and Mr VJ waited for me..they reached at 9am local time and manage to jalan2 a bit...then we waited for another 1hour for Cik Sal..spending time at the shop selling prepaid card or kartu panggilan  convenience store, basically ukur the Bandara which contain JCO donut shop and some cafes as well. However, how did i not go up one level to towards the departure hall?
They had nicer cafes and starbuck up there...
this i only realised upon departing from the same airport on Oct 24th...demmmm..

by the way, i have made the same mistake...again..i bought the simpati prepaid card in the airpirt vicinity and costed me RP50K with RP2500 credit.
It will only cost about RP15K outside...
demm...but at least i don't have to buy some more for my Dec 2012 Bandung trip.

This Bandara for Air asia is at Terminal 3 which also caters for Pilgrims of Hajj. T3 was only alive during this time but after Air asia and some other domestics flights were re-based here, it has been breathing steadily since then..

We left the airport after Sal has landed and started enjoying the night view of Jakarta Raya. 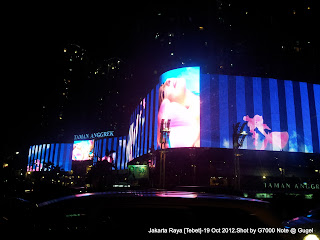 This is the Anggrek Mall which claims to be the largest LED illuminated facade in the world.
I couldn't argue with that. we had none in Malaysia (penting ke pun??)
tapi cantek uolsss....gambar pun bley tukar2 tau..

After dinner by the roadside, we hopped into one of the local convenience store.Circle-K which can be found all over Jakarta, if not the whole Indonesia.

Voila! Heaven for me! Varieties of Nescafe...darn i forgot to snap the counter which holds the caramel, vanilla, mocha sauce which shall complement your hot coffee of your choice..in good condition. I think, it will not last long back in our beloved soil..the bottles that is...hahahahha...

But, my problem while in Indonesia is, the Nescafe didn't meet my daily caffeine requirement which is a no-no for  me laaaa...nasib baik den bawak Nescafe Gold 3-in-1 from home..phewww... 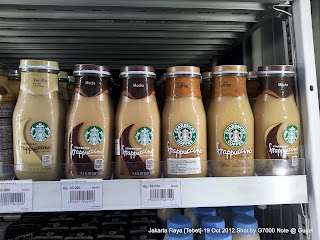 Bottled Frappuccino by Starbuck.
My first sight of em.
(Oct 31st - a friend confirmed that these can be found in Cold Storage Wangsamaju)
But, again, to my disappointment, i didn't try even one...sad..

and check out these super cute cereals packed in plastic containers..
Selepas berpeleseran di Circle-K for 1 hour, we decided to head to the homestay which is located in Tebet Barat Dalam, Jakarta Selatan.
There was a moderate sized mall nearby. Or was it a 7-eleven supermart?
anyway, i've noticed (but didn't go) that there are 2 massage centres nearby..
again, why didn't i???
The homestay actually belongs to..Puan Es or something, the sister of Pak Zainal, owner of Samiaji homestay in Bandung. 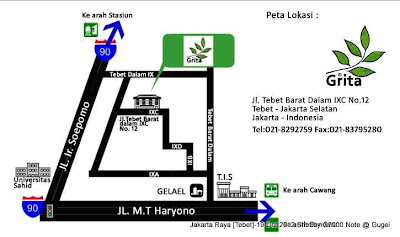 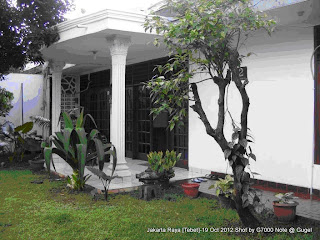 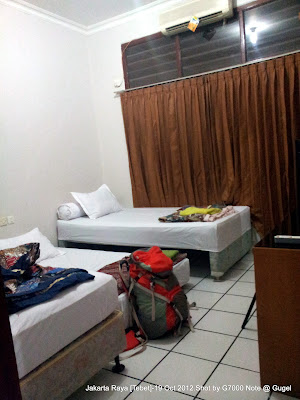 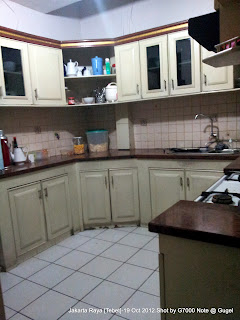 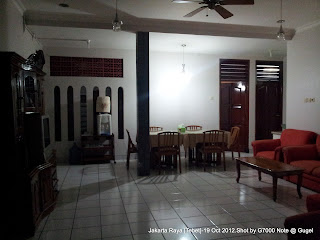 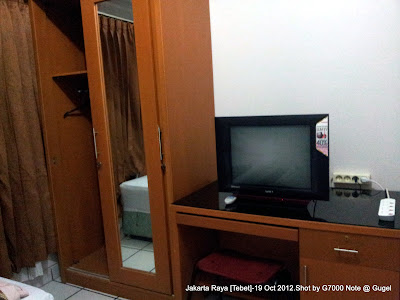 Cool. There's wi-fi, air-cond in each room, ready hot & cold drink water and breakfast of ayam kampung.
yes, the next day, we had chicken soup+rice and fried mee for breakfast.
So not my taste. But it was ok to fill-in empty stomach.
No chilli kan..so..faham2 je la..yang penting , Nescafe ku ada... 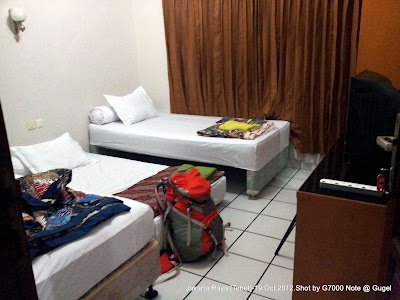 Jakarta's hot.Humid. Dusty. so, water heater not really a necessity. For me laaa...
Luckily, the traffic for that night was okay with minimum macet.
maybe dah malam kot... 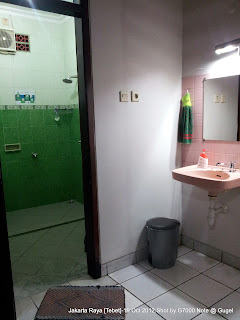 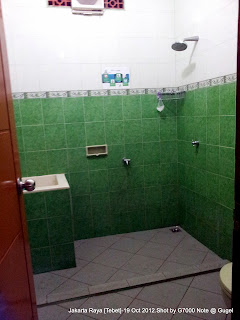 The homestay is actually a 3 storey house with about 12 rooms.
There's a washing machine s well at the top floor.
and this scary tangga..

It actually leads to another room beside mine but the entrance is via this stair which is only reachable via 2nd floor. hmmm...on the right hand side, is the glass window of my room.
yes, we locked those away...ngeeeeeeeee 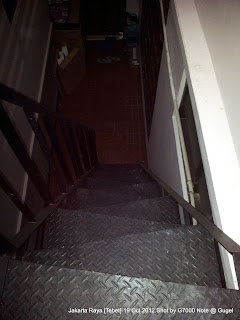 Our Supir or driver , Pak Dedy, went to pick-up the 3rd group of the day of my nieces, nephew and sista.
and the group is getting bigger. and louder...

Luckily, our Supir Pak Dedy is very understanding. Having stayed in Jakarta for more than 10 years and currently resides in Bandung, he knows both city in and out.
so, he was the perfect supir for us and was also highly recommended by our dear cousin.

So, in case you're looking for a good, reliable, friendly, happy supir, Pak Dedy is the best so far.
and one hell of a driver as well.
i know. i sat at the front seat of our 14-seater minibus throughout the journey.
His contact:
Facebook
email : Dedy Supriady [dedydtrans@yahoo.co.id]

i don't know if this would help you but try mentioning my name [Nana] or Atun [my cousin]
maybe, just maybe, you'll get a good price.

end of Day 1..good night sleep. for tomorrow's Day 2 bargain hunting...
wholly made up by Unknown at 2:06 AM