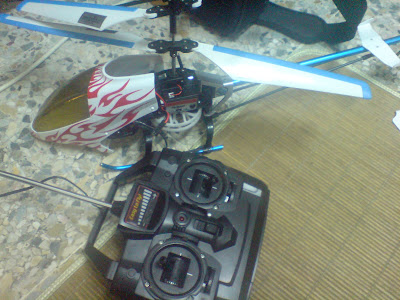 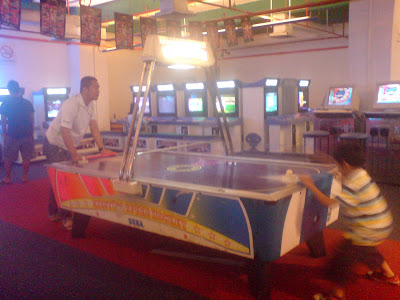 above pics pretty much explained what id did today. hmm...bought a mini heli..RM150 at Alam Sentral mall. hehe....gonna wake up eaaaaaaaaaaaaaarrrrrrrrrrrllllllllllyyyyyyyyyyy tomorrow, err..this morning and try my hands on it.

I just fixed my font door punya door knob. well, i am quite good in fixing things and i do all the fixings in the house myself. My hubby simply don't have the patience for it. He'd rather smash the whole door and buy new one. While fixing the knob, i just remembered that i bought Auldey car the other day. I'm soooooooooooooooooooo gonna fix this one but..i'd rather play game at the moment. I need peace of mind to fix the whole thing together as a car. Nanti, dynamo ke mana, tayar ke mana.

The 3rd pic, adam and daddy in action. I have trouble coaxing him to stop asking for extra allowance everytime we went to game centre like this one in Shah Alam mall. Yg aku geram, 1/2 the game that he played is available in PS2 version. His answer would be "saja"..urghh..usually i will pass time with Virtua Cop, or some touch-the-screen game , or looking like a fool on the dance game, or if available, trying to beat the drum/gendang tuning to Doraemon soundtrack. and as usual Sofiya will look just like this: 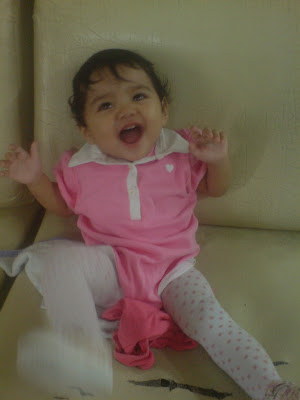 on a diff subject, talked to Iffah today after 14 long years. How i miss those days. and how i miss those yayasan sabah girls. where are they?
wholly made up by Unknown at 12:54 AM 1 comment: Links to this post

Full spec can be found at Apple Ipod Nano site.
I have 1 brand new set but opened box by me to check for contents and battery is fully charged to check functionality.
I've downloaded itunes version 7.6 and available upon request.
Starting price is RM700 and of course negotiable.
Color: Silver
Payment: COC/ maybank, public bank, CIMB.
Delivery: self-collection or buyer pay postal/courier.
Send me email at aluniskywalker@yahoo.com.my.

Have a nice day..

wholly made up by Unknown at 7:57 AM No comments: Links to this post

Email ThisBlogThis!Share to TwitterShare to FacebookShare to Pinterest
Labels: Dailies

There is one thing that u should understand, how i work. When u need me but do not need me, i will stay. But, if u want me, but no longer need me, then i will go

A statement from Nanny McPhee. A magical story.yes, it was already aired aeons ago but..i just watched it today in HBO...haha..ketinggalan zaman tul. Adam sure needs her!!! hmm..magical yes, but why she keeps getting younger towards the end of the movie? what is the significant? i don't get it. In the beginning of the story, she was fat and turned out to be so much like Giselle bundchen in th end. why? well, no time to think about it. I also managed to catch Truman in HBO. I kinda hate the story since the ending has no ending. what happen to him after he went out of the..err...studio? where? why? what about? i hate movies that will leave me questioning..it was supposed to be entertaining, at least for me. If i want more riddles and questions, i'd get them in my everyday life.
Like, why do o stop my diets before i even started em? haha. that's why i am very picky of what i am watching. I love CSI. Maybe becoz it provides answers in almost every episode. hmm..Steel magnolias next in HBO...nk play game laa before i go to sleep.

Today is Maulidurrasul and as i tyoed maulidurrasul in google search box, this went :http://www.geocities.com/traditionalislam/MaulidurRasul.htm. Very informative and refreshing knowledge. Tmorrow, Adam's school will be celebrating Maulidurrasul. Below are some few points from the site.

Coincidently, i found a book while browsing for additional books for Adam. something related to "melayu" and possible answers why malays are facing with their downfall. Will sure to grab it later.!!

Taking about Adam, he is getting his exam paper back, gradually. First the maths, 76/100. Since his conduct of english is...err...a bit lower than minimal, he lost marks where english comprehension matters. "More", "Less", puzzled him so much till he lost good 20 marks. The next day, English. i was startled he got 82/100 in English. He lost marks in spelling where he spelled the word "she" as "shi". haha..i couldn't help but laugh. Although it might be his very first exam in standard 1, i am concerned of his capability. He hates going to bookstore let alone reading books. He even cried when i coached him in doing additional works. Am i to strict and pushy? some people encouraged me to send to those mental arithmetics classes. hmm...i have to think about it. But..the 3rd day, the science result was out and with 44/100, i was closed to change into a she-hulk version. As i went through his science paper, i realised it is not his fault. He couldn't understand the instruction. For instance, "I have ____ eyes". He wrote down "eyes" in the blank space. The question was: count the number of the body parts. He knew what eyes are, fingers, hand, foot. I am puzzled tho, since he knew his body parts but still wrote "hands" in the space with arrow towards the "hair". I guess he was out of space at that moment. He's handicapped due to his poor english conduct and i am to blamed right to the core. He may be strong in some other areas but i think when it comes to the details, he might get lost. Not to mention his comprehension and english. Tuition , anyone?

wholly made up by Unknown at 1:10 AM No comments: Links to this post 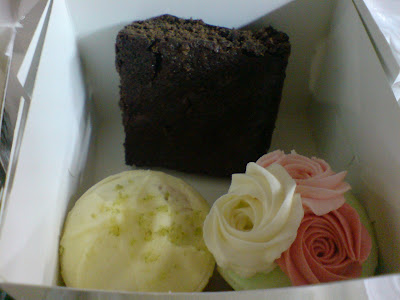 Went to DU after work. Purposely went out at abou7.30pm thinking the traffic would be clear. damn i was wrong..anyway, at least the traffic has some mercy today. One purpose, one destination: Wondermilk cupcakes shop at DU!!! I was tempted after seeing the website at http://www.ilovecuppacakes.com...cute cuppacakes!!! Alice also told me about a cupcake shop near the Curve. i shall try it!!! Not to mention, marvel cupcakes for orders and deliveries. back to 1dermilk, spent 30 mins just to find the shop!! Humaizi and alice were no help, thus came the rescue from wandy!! thanks nox..ko mmg superb...J-Co donuts treats from me soon..errr...later. The cuppies were good, yummy and pretty. 30% off after 8pm and i grabbed 3 cuppies and 1 brownies. Pina colada (pineapples+fruits whatever) and cheesecream topping -i think it's pina colada la-.and Maxi royal vanilla with creamy roses topping !!!! sooooooooooooooo pretty..yet still went down my perut...hmm...the verdict? yummy. wudn't have come all the way from Glenmarie just to try some, ain't it? wait till i taste the rest and i'll give a true verdict......

wholly made up by Unknown at 1:16 AM No comments: Links to this post

Email ThisBlogThis!Share to TwitterShare to FacebookShare to Pinterest
Labels: food 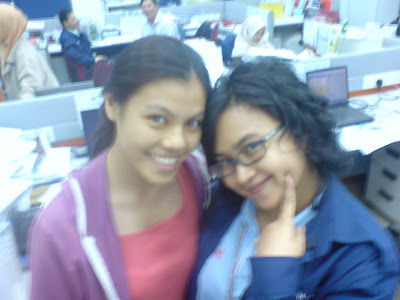 her name is becca, nick name of course. SPM leaver and did a stint in TW as a temp staff. To her luck, she was destined to attend an audition for Deal or No Deal in NTV7. She got the role. So, as today -March 18th- is her last day in TW, i wish her luck and we'll catch with u on TV.. Pic taken before she gets famous...hehehe.. 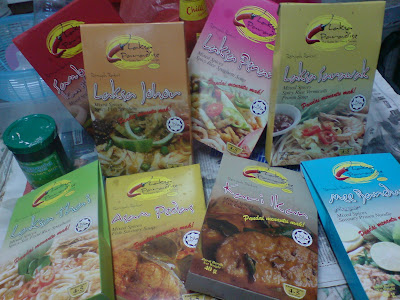 Last reunion meeting, Pojik & Put were very kind and gave away few Noraini's instant "perencah". Well, today i decided to try one, Asam Pedas flavour. I was jokingly ask Pojik whether they have put fish in the box and was returned with standard statements like "apa lah ko neh"..heh...by the way, Asam Pedas does not taste great. Maybe i didn't put anything else other than Ladyfingers (no, not human fingers u moron, it's "Kacang Bendi") and fish. I should've put more self-adding ingredient kot like daun limau..errr..entah. Asam Pedas reminds me of Del as her AP is simply superb. Maybe all Johorians love asam pedas. anyway, TQ Put & Pojik.

wholly made up by Unknown at 12:03 AM No comments: Links to this post

Somebody jokingly mentioned in forum that i may "lupa daratan". Never. As Amy is oso my fave, this one expressed my feelings , exactly!! Polin, 4u babe.

wholly made up by Unknown at 1:50 AM No comments:

Are You a Pirate or a Ninja?
My Result: Pirate

Arrrh, shiver me timbers if you're not the greatest pirate who ever sailed the high seas! We could try and be nice and say that you're not all bad, but we know that if ye were the captain of a ship of raucous savages ye wouldn't spend any time training them to explore their sensitive side. You'd probably be boarding luxury cruise ships, ripping pearl necklaces off ladies, and looting the men (after stripping them of their credit cards and cell phones of course). Long John Silver, Blackbeard, and Captain Hook all have nothing on you.

You could probably rob someone blind and still leave 'em feeling glad that they met you — even if you made them walk the plank! While you have one sea-weary eye on a treasure trove, your other eye (assuming you're not wearing a patch) is making sure you're always seen strutting your stuff and looking mighty fine — wooden leg and all.
What are you?
http://web.tickle.com/jumpto?test=pirateorninjaogt&c=50652

wholly made up by Unknown at 12:19 AM No comments: Links to this post

still working out on the PA thingy....3 years purchase records!!..arghh..it's killing me. Pie__________@Cari has posted interesting pics in forum. It's my hometown..check it out...

ok...ok..it's taken from afar..but hey...do you guys have kabus @mist surrounding your hometown? i do..haha - sabahans, pls do not even reply to this~..can i see the same thing from my mom's latest kebun? i hope sooo.... on different subject, maybe i coulld have some rest this weekend. hubby's voting place is in kuala terengganu and so, if we're heading home, i could use the time to replenish my energy. if not, i guess, i'll have my rest here in sunway. but six, it's simply not the same. Yes, i love going back to my in-law's house!! suprprising??
Talking about election, there's nuthin much to say as my voting place is still in Keningau. I thought i've changed my locality 4 years ago. I didn't even remember but my hubby does!! sooooooooooooooo...where is the cekap & telus thingy has gone to? No, No..i'm not against the gov or BN or UMNO, but hellloooooo.......i paid my tax tawww!!!
wholly made up by Unknown at 12:18 AM No comments: Links to this post

Got a message in my chatbox. I've also put up the link "Shopping I". It's one of the numerous online shopping spot, which features branded items at a cheaper price. at least the owner is being honest of the used items including how long she has worn those items. I kinda dig the Keyng pumps but white? i love white but...hey gurl, my size is 6. Try it. Shopping II features a friend's shopping spot. Sexy stuffs but i gues not in my size...:P
What i'm doing today? Office work while coaching Adam with his studies..next week is his SK & KAFA exam.
good luck to me i guess..wile my hubby is somehwhere in PD for his company trip!!!! Having fun!! Hope he will bring home a nice lucky fraw item this time!!
wholly made up by Unknown at 2:24 PM No comments: Links to this post