While waiting for the last group to reach Jakarta in the evening, the group has decided to pay Pusat Grosir Tanah Abang a visit.

There are many theories of shopping in Tanah Abang including:
(Warning: Read somewhere in the net but not necessarily true)
1. Tanah Abang is the centre of distribution of clothing. hence, the price is abit lower than others including the infamous Pasar Baru in Bandung
2. Block B shops sell their goods a bit cheaper than Block A

Well, i found No 1 is not entirely true but somehow, after being lost for few times, alone, i do find No 2 is , well, live up to its reputation.
Why?
Block A: New shoplots maybe. More organised and neat
Block B: Typical shoplots in textile centres perhaps
By the way, there's a building named Metro which is also a prt of Pasar Tanah Abang.

Did i go there? Seriously, i have no idea. It is a big place.

We started the day quite early and the idea was to stay in Jakarta city for the weekends and head for Bandung on weekdays to beat the traffic.
This tip is very useful and i personally advise you guys to actually note this...
again, somewhere in the net, Jakarta dwellers will reduce to about 5M people in the weekends compared to 15M during the weekdays. Usually, the city peeps will head to out of Jakarta places for liburan.
This is also backed up by our Supir Pak Dedy.

It took us about 45 minutes to reach Tanah Abang from Tebet, Jakarta Selatan.
Our minds were fixed at-kain, kain,kain- for i have plans to sell some of em back in kantor. 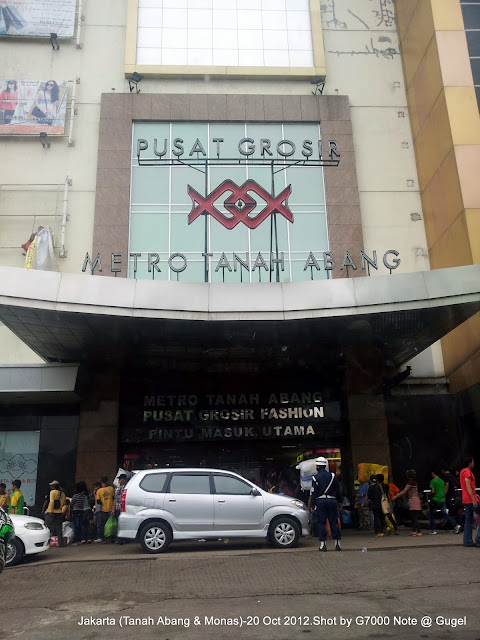 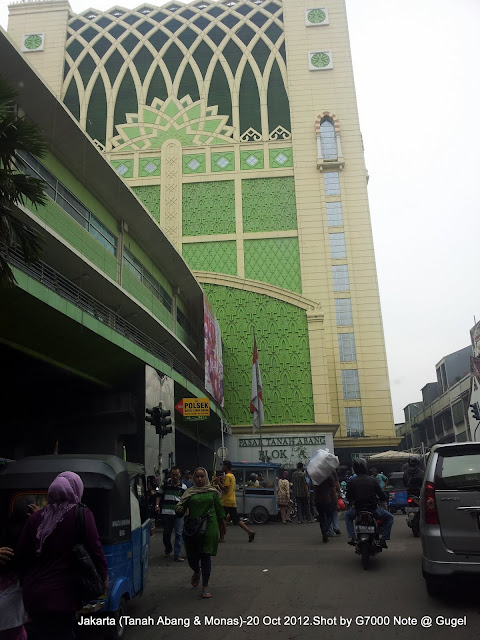 This is where we get off and the entrance is at SLG level. 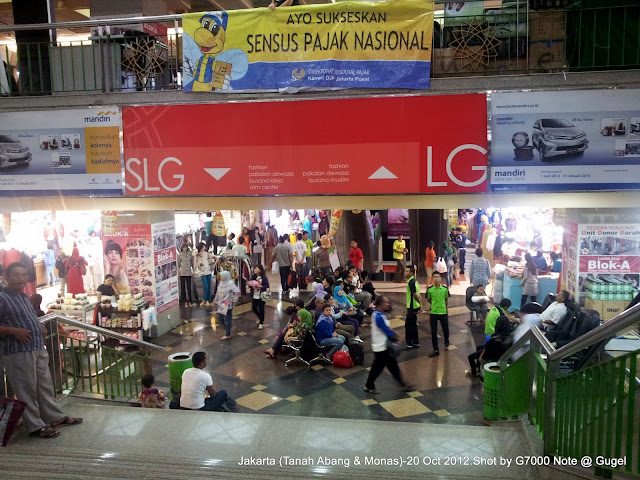 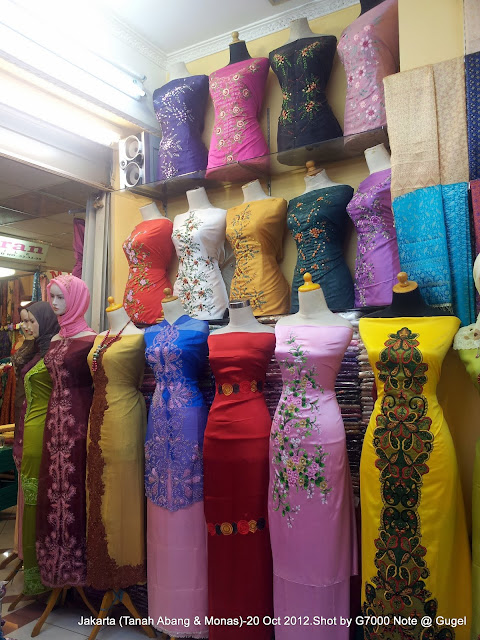 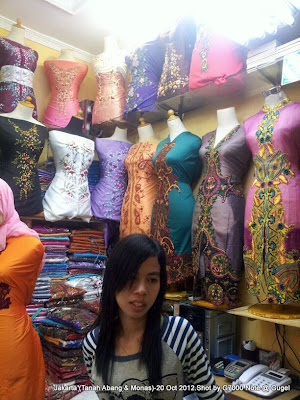 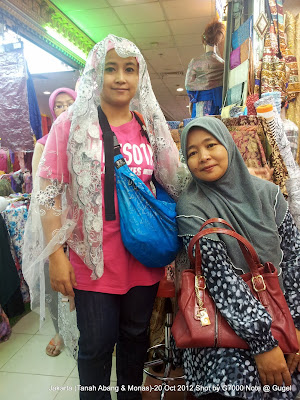 One of the main objectives was to but lace, and textile for Yun's wedding.
It was supposed to be cheaper here in Tanah Abang.
and i guess it was indeed. The winning point is always that they have the latest and chic and pretty designs. 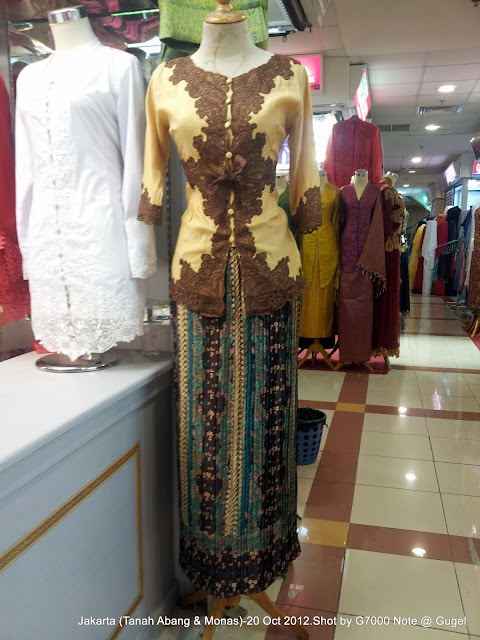 aaaa..one of the ready made set on sale and surely, i grabbed one (the above to be exact). Chantek kan? 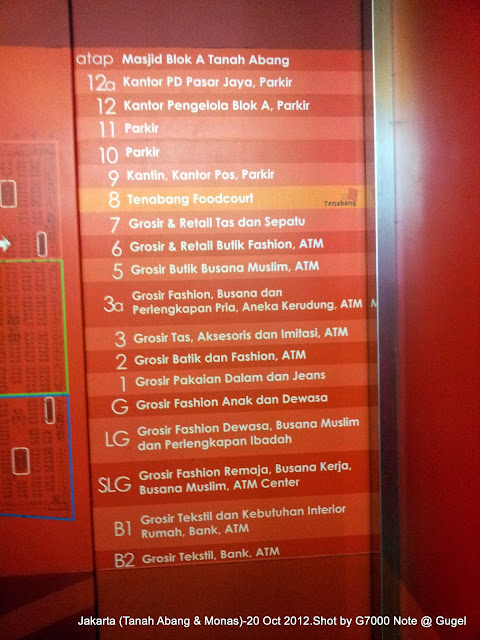 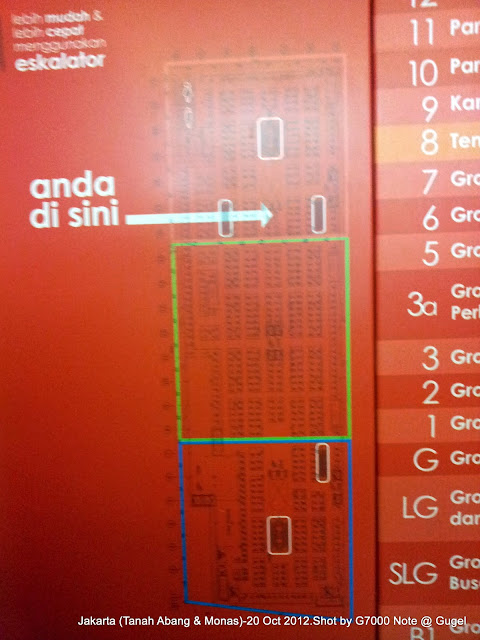 Hungry? no worries. There's a foodcourt on level 8. This one is way better than the foodcourt in Pasar Baru.
No one will actually bugs you trying to get you to order form them.
Here, as any other foodcourt, we shall order at the counter.
(actually, in Pasar Baru, there are biiiiiiiiiggggggggg reminders to the patrons to order direct at the counter to avoid others to mark-up on top of the actual food price).

There is a shop, i think it was CFC, which has a special menu - Menu Astaga. If not mistaken it was supposed to be super spicy chickens. urrghh...i forgot to try it...heheh 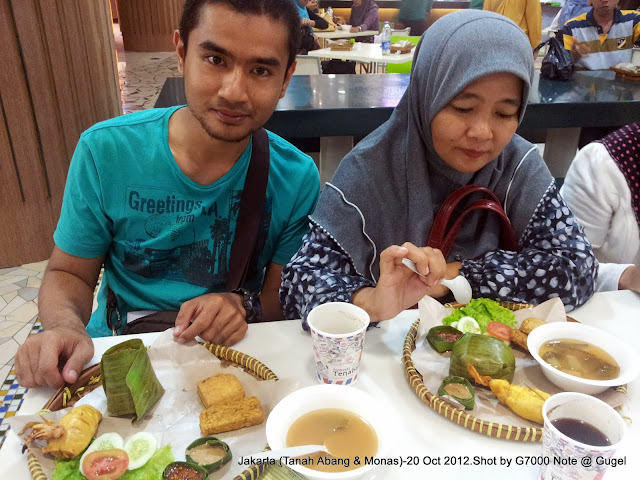 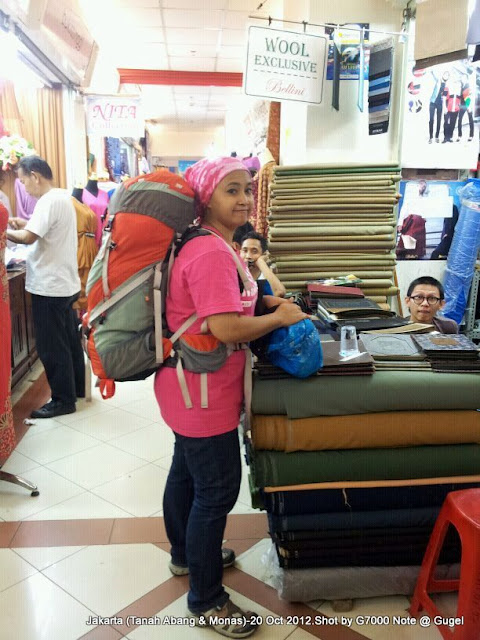 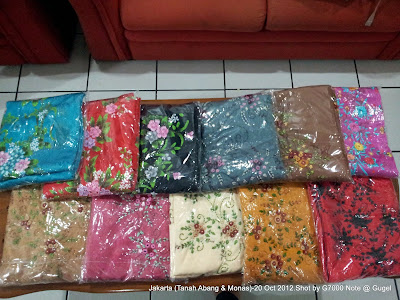 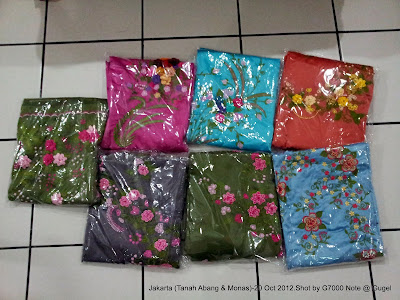 and some other stuffs not pictured here...

anyway. a reminder to all eager shoppers.
see below sample?
i thought i was getting the exact one.

naaayyyy..i got similar. without the bottom flowers..

so, next time, a reminder for me as well, check EACH AND EVERY package. i even got 2 which are stained but luckily managed to get it clean easily. 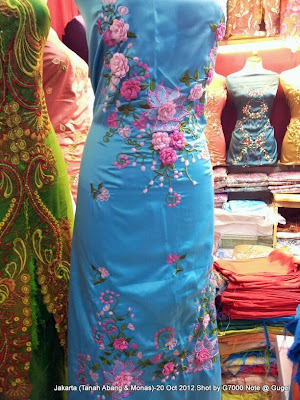 after some rest at our homestay after nearly 10 hours at Tanah Abang alone, we proceed to pick-up the last group to reach Jakarta Raya. 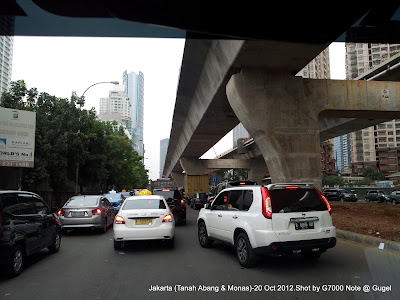 At Bandara, there was one peculiar man who wanted to get onto our bus.
Luckily, our group is not that huge to not notice this man.
He tried to get onboard by opening the door few times which scared some of us.
We managed to get away safely.
Nevertheless, hopefully the man will be just fine. maybe he just wanted a ride to jakarta city but sorry, u just scared all of us.

anyway, we proceeded with dinner at one of the resto - seafood i guess. When we reached, it was on last orders. Hey, did the resto here actually closed at 9pm?
hmm...anyway, i do notice that it is much easier to get food and resto in Bandung.
Before we head back to our bunk, we stopped by Monas and i am quite impressed by the view.
There were patrol cars around and according to our supir, sometimes, there are demonstrations here and also at the Bulatan Randy (ehem) as per above pictures.

hence, there were on standby in case those get worse. 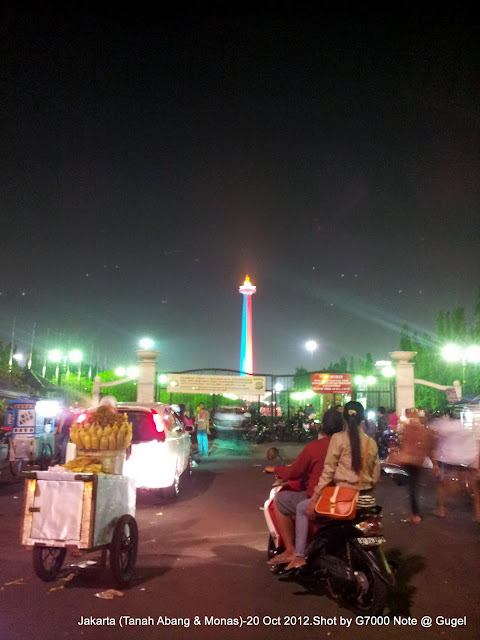 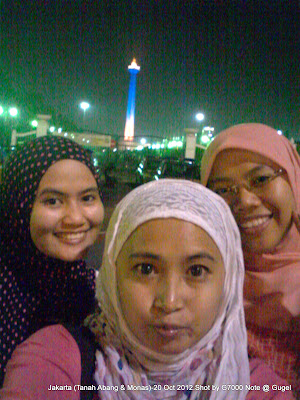 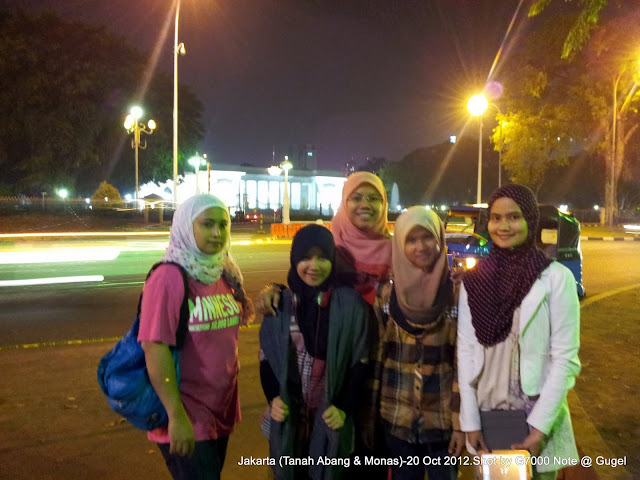 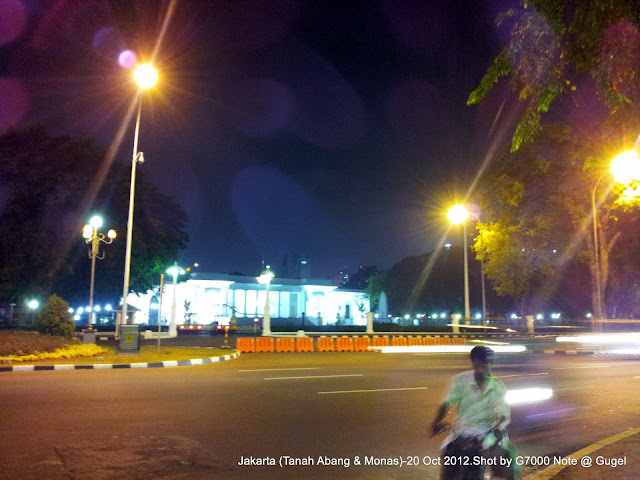 All in all, 2nd day experience do enlighten my view of liburan or weekend.
we can just hang out pretty much anywhere permitted.
It does not mean that we need to be at pay-to-use areas just to have a chat.
i wouldn't know where and what for you, but for me..
we have many parks, lakes around.
Bulatan Randy (refer above roundabout) can be accessed and people can hangout on the curb at night.
but i don't think ours are accessible.

there's always the first to everything.
why don't we give it a try (grin)