A date with Dr Ng

A date?
Several dates, to be exact.
well, those were actually appointment with my surgeon, Dr Ng Char Hong. some said he is among the best in his field. one of the best Breast surgeon? general surgeon? as fas as i am concerned he is my cute surgeon. (lalalalalalalala).

My last chemo was in early June and a week after, it was decided, mastectomy it is.
I kinda just go with the flow. I didn't look further than what alternative treatments i have in hand, but i trust the decision taken was in the best interest of my family especially Oya.

Yes, i kinda feel i don't have much time if i don't act fast.

Oh yes, i was anxious. Who wouldn't. It's kinda a major op for me (apart from c-sect) and also the thought of losing my right breast is...was....surprisingly didn't really bother me at all.

Oh yes, i was more afraid of the pain after the drug was gone than losing my breast.
I was kinda hoping that i'd have similar sensation as my 1st and 2nd c-section. I didn't feel much pain during those 2. Only those "pedih2, perit2" at the end of the stitches.

So, i  was warded for 2 nights at UMSC. ....UMSC you'd say? yes, it's the private wing of UMMC @ PPUM @ UH. Many are not aware but the main building is located between MAHSA College and entrance to UM. But the ward is located at Menara Timur UH, Level 10.

I was discharged with 2 tubes attached to me for drainage. hence today, i had a follow-up to remove tube for Bottle B and dang it was painful !!!! i know it was only for 10 seconds but it was like having a knife cutting through your finger.

Bottle A is another story. When it was attached to me, the nurse forgot to remove the lock function and there was no fluid in the bottle. so i went to UMSC today with high hopes of getting both removed.
unfortunately, the good doctor unlocked the bottle and a gush of 30ml blood+liquid poured in.
so, in 24hrs, if the level is less than 30ml on top of today's measurement, i could have it removed by monday.

in case you're wondering:-


Frequently, a drainage tube is inserted during surgery in their chest and attached to a small suction device to remove subcutaneous fluid. These are usually removed several days after surgery as drainage decrease to less than 20-30 ml per day

but i guess all is just gonna be ok. hopefully the liquid+blood will dry up soon. 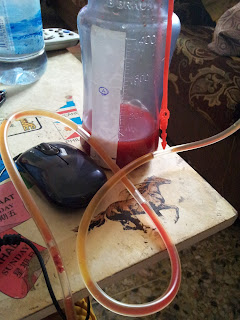 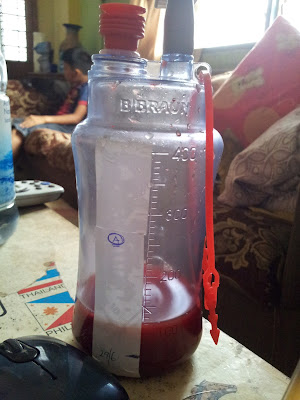 Email ThisBlogThis!Share to TwitterShare to FacebookShare to Pinterest
Labels: Journey to Healing, mastectomy