Everything is up to Allah SWT. 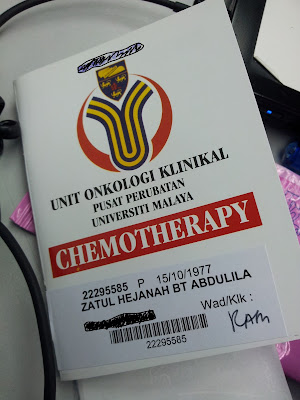 mid-2011, i started feeling a lump on my right breast. Even during breastfeeding oya, i know there is a lump. However, a combination of breastfeeding, blocked tube and on/off enlaragement of the breast due to menses, i took it as normal lump.

Early 2012, i went to a well-known lab recently opened in my office's vicinity for ultrasound checking of the breast since mammogram was not advisable.
Diagnosis? Fibroedenoma. Less than 1cm. Normal tissue growth. Nope'it's not cyst. and at this stage, it was not dangerous. I was advised to re-check after 10 months. Fine.

A few months later, i called a society, also well-known, for advise.
I was told that the lab is indeed trustable and good. I had nothing to worry about and i just have to go for checking as suggested.

mid-2012 onwards, my breast started to feel pain before and after my menses and the lump is getting bigger. Some friends practically dragged me to a clinic which wrote a letter to a hospital of my choice for further check-up.

On December 18th 2012, i went to Sunway Medical centre for mammogram, ultrasound and biopsy.
On DEc 20th 2012, i was positively diagnosed with Breast Cancer.

and the journey continues with blood test, CT Scans, Bone scans, etc. I had visits to Sunway, SDMC and i am getting my chemo treatments in PPUM (UH).

Now we know why i may seem "late" to be diagnosed. My advise is go to the hospital. Period.
For anything. If you have the money or insurance coverage, go to private for faster result ( i have very different experience and opinions on private hospitals. maybe i'll share in later post)


It seems like i can;t allow myself to have fever..erk... 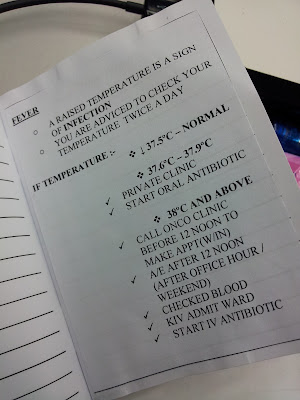 I'm taking in FEC for my chemo. If this doesn't work, then i would change the drug combination again. 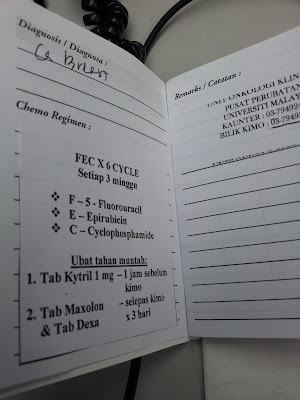 I have already come to term with it and i am very open to the fact that i have it. The Big C.

Cry? yes. But i am very2 thankful to Allah SWT. Why? this has brought me closer to him. I'd like to believe so. There are so many good things  happening to me and my family after i got the cancer.
So what's the big deal?

I didn't know i have so many wonderful friends who will take and do the extra mile. for me. I wish i could list them here and tell the world what they did but i would prefer to keep with me as the "ganjaran" they will get from Allah will be better. Semoga Allah permudahkan hidup mere, peliharalah hidup dan mati mereka. Amin.

I also know who and who amongst my friends. Those who seem to help you but talk about it behind you. Yes, it hurts but i no longer care since they are no longer important in my life.

I have no problem sharing in FB about it as well as i believe the more i share, the more i may educate others as well as getting tips on treatments.

I hope someone may benefit from my openness. I didn't intend to brag or suruh orang kasihan.
I just need my friends to uknow what i'm going through and may understand why i may not be able to be there when needed. Insyaallah, one fine day, i will.

Email ThisBlogThis!Share to TwitterShare to FacebookShare to Pinterest
Labels: Journey to Healing

Be strong, may Allah grant u all the ease to go through this. Ameen :-)