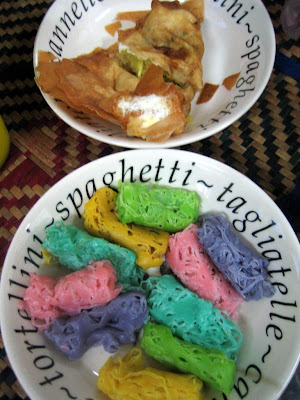 The top one is called BRIK. A food originated from the East. It has something like mashed potato and an egg as the filling. The flour will be rolled in front of your eyes, then comes the mashed potato and the egg. Then off it goes into the boiling hot frying pan. Tastes soo good while hot. RM2/pc and i'd say it's worth it.I think the seller is from Bosnia or something. The daughter speaks fluent malay though.

The 2nd food is a colourful array of Roti Jala. sold by 3 arab-mixed pretty sisters (i think so). Frankly, i was drawn tot heir stall because they're pretty!! Not that im a lesbo or something. Then, this one catches my eyes. Not only the Roti Jala comes in variant colours, the chicken curry is also delicious. RM2/Set of 5, also worth it. 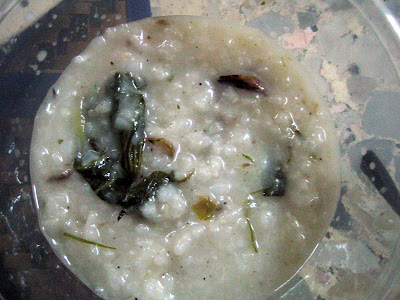 This one is a local Terengganu poridge. It must have the i-dunno-what-daun-is-that or else, it's just like any other Bubur Lambuk. The leaves give its speciality and it tastes good. RM2/Bowl, well ok larrrr..

Email ThisBlogThis!Share to TwitterShare to FacebookShare to Pinterest
Labels: food

tat's too much colouring in the roti jala, not good at all